skip to main | skip to sidebar

The NOMA blog project targets both local and national political/social issues. The opinions and information presented here represent the perspective of the NOMA students who live in North Omaha. This in an ongoing project. Keep coming back to view more of our work.

We are beginning the Fall semester of the NOMA project! Look for more details tonight.
Posted by Lynnette G. Leonard, PhD at 8:41 AM No comments:

More exciting happenings here at NOMA. Ronnyece has posted a new blog presenting information on a key issue for teen's and North Omaha: Teen Pregnancy. It has been updated with four new posts with facts and stories on the issue. She hopes you like and tell others and link away.

Denai, a longstanding NOMA member, has created an exciting new blog In the Kno on H2o . The current topic is on water quality and the need access to clean water around the world. You can follow her investigation on these key issues by visiting the blog.
inthekno-h2o.blogspot.com
Posted by Lynnette G. Leonard, PhD at 2:18 PM No comments:

Reactions to the Inauguration

NOMA high school students reflected on the inauguration and what it meant to them. They could focus on anything of interest to them related to this topic.

What the inauguration meant to me?
“As I watched the inauguration so many things ran through my mind. I not only thought that African-Americans had a chance, but I also thought that Asian-Americans or Latino-Americans etc. have a chance. I also thought of others and what this would do for them and for our economy. When Obama gave his acceptance speech at the inaugural balls and also at the inauguration I knew that our country has risen over a major slope. Almost every ethnicity group came united as one, and accepted that President Obama was and is our president. However I didn't think that it was right for some of the people who gave speeches to refer to our president as "Obama" instead of President Obama. I feel that we should no longer refer to him as Obama, Barack, or Barack Obama. I feel that we should show him respect by calling him Mr. President or President Obama.” ~ Precious

“The Inauguration touched me a lot! I knew that change was here and that it was going to stay for eternity. People were gathering together. Nothing happened, I could be standing by a celebrity and they would be like an ordinary person. That is change!! It wasn't just an African American that changed it was EVERYBODY! Latino-American, Asian-American, Caucasian, and etc. We need more days like this. I hope this was a message to everyone to make a difference.” ~ Ciera

“The inauguration meant a lot to me. It meant a change that many Americans were looking for. It brought out hope, and a difference in the way American Society looked at life in a variety of different ways. It meant that I saw a smile on everyone's face, the famous chant of yes we can, and the hope for a better day. What did the inauguration mean to me? It meant that my life would become easier to live in. That things were finally going to be taken care of. Priorities were in order, and that now we had someone in office that not only cared about the adults, but the youth too. The inauguration meant to me a whole lot more then I can explain, but I can explain this. Never have we seen Americans jump in joy for a president as Barack Obama. Yes, he is our first black president, but he's just like every other president with a belief, and an idea on the way the U.S. should be ran. At the end of the day the only thing that separates him from our other 43 presidents is his color. This alone shows that America is moving into the right direction for change, and I’m glad to be alive to see history made. GO OBAMA lol.” ~Reggie

“I think that inauguration was a HUGE step in American history. That day will be remembered forever, I know that I will never forget it. The feeling that I felt that night I dont think can even began to match that of someone who has been around through the diiferent stages of America. Those who have lived through the trial of everyday life as an African American and never thought that there would ever be a black man as president. Im sure that even those who were not here to see it in person all saw it in heaven and Im sure they had there own Inauguration Celebration! Now African American and other ethnic groups can acually become anything they want.” ~ Denai

“Forgetting about the politics (republican, democrat, independent, anarchist... etc.) I think that it is a wonderful thing that America seemingly got over the race issue and put our first African American in the oval office. I think that the response to this 2009 inauguration was great, its good that not only the adults but the youth, who are the future leaders of America, really got into this one. Hopefully, future elections will receive this type of over whelming excitement.” ~ Tori

“I think that the inauguration was a big step towards something new. I also think that it meant that there is going to be some significant changes that will happen within the next four years. It's going to be nice to see what the new president has in store for the country. I would love to see what he is going to do with the war and other things like health care also!” ~ Alexis

“I think the inauguration of Barack Obama has made a huge impact on America, we were in a huge uproar about whether or not we should have the rescue plan put in order. I think the plan will help to re-stabilize the economy, and help us get back on track. I think Barack Obama is doing the right things to help the economy. I think a lot of people, not necessarily the ones blogging, think that just because we have an A. A. president that the race issue is completely gone. There are still some signs of racism among us. It's just the fact that we haven't completely overcome the issue of racism, but we are close to doing it.” ~ Brooklyn

“The inauguration didn't meant a whole lot to me personally, but it was nice to know many Americans and people around the world were happy about the results. Also, I'll admit, Obama's speeches fill me with hope.” ~ Alan

“I'm right there with Alan. I didn't really pay attention to the elections but it was great to see so many people celebrate this great moment in history. The fact I was alive and saw history happen was remarkable too. The day he won the election, it reminded me of when The Death Star in Star Wars was destroyed and everyone all over the galaxy celebrated. It is indeed a great thing. Obama's speech did fill me with hope too. I'm excited to see how much he will get done during his term.” ~ Taylor

“Honestly, I had no feeling about the inauguration one way or another. It just wasn't that big of a deal for me. Yes, it is great that Barack Obama won and if I could have I would have voted for him, but he could have said pretty much anything besides I resign and I wouldn't have minded.” ~ Cameron

Posted by Lynnette G. Leonard, PhD at 3:30 PM No comments:

The North Omaha Media Alliance (NOMA), which is made up of high school students and their advisers, observed the historic election and offered comments to The Omaha News. 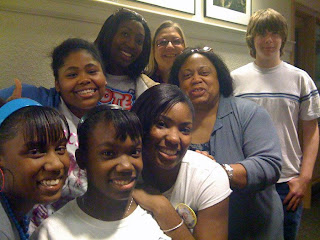 NOMA Participants
Observations and commentary: Girls Inc. of
"This night is very heart pounding. This election will change the lives of many including other future generations. At this moment, as I type, it is too early to tell on the future president of my country. If Barack Obama wins then I will be completely astonished and satisfied with our government. If John McCain wins then it will be a total OBAMAnation to all. Whoever leads us I wish them to apply peace and prosperity to our country.Ashley, 16


"Tonight is a night that I will never forget, in my heart I pray that Obama wins. No matter what happens history will be made. If Obama wins he will be the first African-American President. If John McCain wins he would be known as oldest President, and Sarah Palin would be the first female Vice-President. Truthfully in my heart I think that if McCain wins then the world would be completely be adulterated." -- Precious, 14
"Tonight is the night that we make history in the . Our world is in turmoil and in need. We cannot be lead by a man whose age out weighs his accomplishments. Obama would be a help to my family and the other middle class Americans. Joe Biden has more experience than Palin and McCain put together. McCain shows no humility, in my opinion; truthfully I think he wants his name to have immortality." -- Ciera, 16

"Today has been a very exciting day. All day I have sported my Obama shirt. Everywhere I looked I saw kids with their Obama shirts. Today will be a flashbulb memory, a memory you will remember for your whole life. One day I will tell my grandchildren about this day. Watching the results on T.V. is very frustrating. All the results either haven’t been reported or are too close to call. Who will be the next president????" -- Denai, 15


Bellevue
"Today is a somewhat important day in . Today we line up out side wait for hours in order for us to have a chance to vote for whom we want to be our next president. Whether you chose the conventional Democrat or Republican candidates Barack Obama and John McCain respectively or less popular third party candidates such as Ron Paul or Ralph Nader or even write-ins such as Chuck Norris, the choice is entirely up to you. It’s great we live in a country where we may freely vote for whomever we want and have our voice heard. Watching the turnout on TV is exciting as we can see how the world votes live and keep up-to-date stats on who is winning where. I in particular favor no candidate; I blame some of my apathy on the fact that I have yet to reach voting age but perhaps I will gain even more interest during next election when I will be old enough to vote, So if Obama or McCain wishes to run for a second term I can help either keep them in or kick them out of office. But no matter whom wins I hope our next president will be able to lead our Nation to greatness and help pull us out of the shadows that we have currently begun to slip into." -- Ian, 15
Posted by Lynnette G. Leonard, PhD at 2:58 PM No comments: